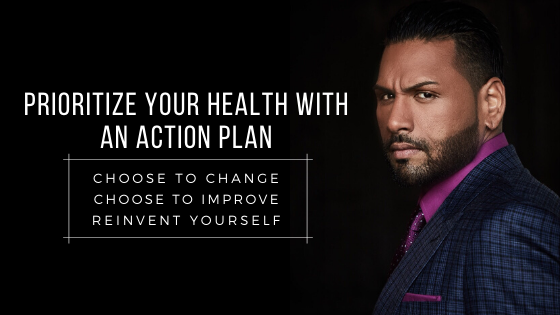 A successful business has a business plan.  A successful lifestyle should have an action plan.  Transforming the way you eat and exercise does not happen overnight.  The way you go about your daily life requires unlearning years, and sometimes decades, of bad habits that are compounded. Just like fat accumulates in the body over time, bad habits and bad ideas can also accumulate in the mind over time. And the longer they stay there, the more ingrained they become. A lifestyle action plan is your guide to reinventing yourself.  The guide is based on your mental commitment to change.

Jas Mathur teaches that at the root of all personal transformation is significant mental shifts, a mindset change. This is the essence of his company and movement, LIMITLESS.  Jas helps millions of followers and listeners learn how to go to the root of their thinking, question their long-held assumptions and beliefs, and change what needs to be changed in order to have serious and lasting personal transformation.

HOW DID JAS MATHUR REINVENT HIMSELF?

When Jas was in his 20s, he was living an absolute dream in some ways. His was grossing over $50 million in annual revenue, and he was one of the world’s fastest-growing serial entrepreneurs.

Although he had business success, he did not prioritize his physical and emotional health.  Jas was struggling with significant health issues due to living a very unhealthy, undisciplined lifestyle in terms of exercise and nutrition. He topped out at 450 pounds, with a 68-inch waist and a 6XL T-shirt size. He realized that he had to dig within himself to engineer transformation on a lasting and significant scale, a lifestyle action plan. He understood that doing what he had always done in terms of health and nutrition would keep him in the same place he always had been, and that the older he would get, the worse things would become.  He needed to commit to change and self-growth.  Jas committed to change his life for the better, make healthier choices and not only be a business leader but a lifestyle leader.

Although he was the only one who could commit to his own transformation, like a true leader, he knew he need a plan and that he could not do it alone. He enlisted the help of a trainer, chose healthier options, did not listen to the negative voices in his head or of those around him and made consistent healthy lifestyle choices in all aspects of his mental, physical and emotional health.  At the time, his lifestyle action plan was in his head and he started to see real change.  After quickly losing 88 pounds in three months, his lifestyle action plan was not only inscribed in his mind but also became a living document and a guide for himself and all of his eventual fans and followers.

Jas soon lost over 250 pounds, transforming both his mental, physical and emotional health.  He made positive changes in many aspects of his life, but soon realized that changing the voice in his head was key to committing to a true lifestyle chance.  However, he could not do it alone.  He also chose to surround himself with people who were supportive of the changes he was making and stopped listening to the naysayers.  It sounds simple but it is not.

Changing the voice is his head, realizing and taking control of his fears and implementing his lifestyle plan led him to an unexpected role as a fitness and health expert.  He began to influence more and more willing listeners, connected with celebrities, and expanded his LIMITLESS platform into a variety of health and fitness divisions. Today he helps people transform their mind, body and spirit through a variety of products, services and expertise.

For Jas, the future is truly LIMITLESS. His current trademarked products and projects include NZT-48, Divatrim, Amarose, Xanquil, SmartSurf, Limitless Pay and continued growth and innovation in Fintech, (the financial and technology crossover space), in order to serve companies that use technology to provide financial services to businesses or consumers.

His latest up-and-coming venture is Amarose, which is a partnership with entrepreneur and television personality Amanda Saccomanno. Amarose, which will be launched this summer, is a line of beauty, skincare, and personal care products.

If Jas had not changed his lifestyle action plan, he would not be the success that he is today. He was convinced that he wanted more, that he was not willing to settle, and that a commitment to making disciplined choices would result in achieving life goals beyond financial success.  Fortunately for us, Jas is not the only person who has benefited from his significant life changes but millions of people have also benefited as a result. If you do what you’ve always done, you’ll get what you’ve always gotten. But if you do something different, you’ll get something different, and much better!

How to Get the Perfect Title & Description for Google’s Search Results?