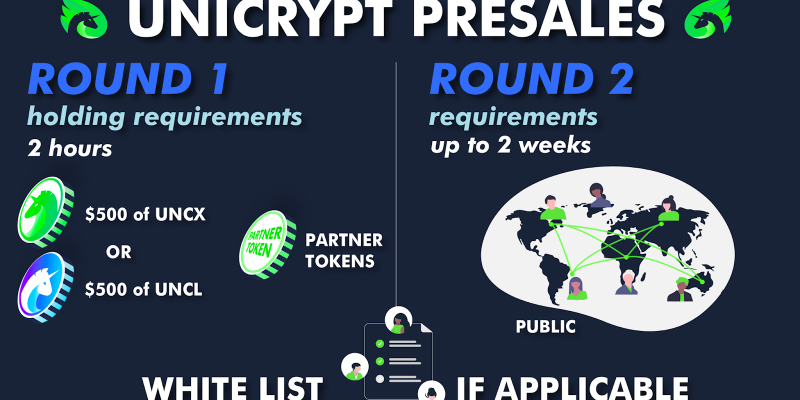 UniCrypt is a blockchain platform creating the best possible environment for liquidity locking while establishing users’ trust. The continued loss of trust in decentralized finance projects is a significant push to what UniCrypt hopes to achieve.

The project recently announced its ongoing plans to unravel its decentralized launchpad set to roll out at the end of January or early February. Currently going under auditing, the platform will host presales for any project willing to collaborate.

It puts in mind the hardships that startup projects face, including the lack of support, funding, promotions, and more. Therefore, it is a public platform that will allow any project to host a presale to leverage its resources to advance. As UniCrypt puts it, the launchpad will be the ‘Uniswap of presales.’

To ensure that it still maintains the platform’s credibility, UniCrypt will release a function to encourage whitelisted auditors to point out any suspicious activity. If a token is flagged as questionable, the same information will appear during the presale.

UniCrypt presents itself as a clear competition to all its centralized counterparts. Good examples are Binance, TrustSwap,  to mention but a few. While centralized presale launchpads have their fair share of popularity, they still fall short in some areas. One such case is the freedom of all to use their platforms.

For a project to hold their presale on centralized launchpads, they would require to match several factors as per the host platform. For example, Binance reviews the project history, how long it has been in existence, its potential on the crypto markets, its possibility for adoption, etc. Afterward, the launchpad team will assess which project is best to take up. Although it is a good way to avoid fraudulent activity, young projects may feel intimidated in such situations.

UniCrypt’s launchpad directs its objectives to provide equal opportunities for everyone who wishes to start their journey. The beginning will only allow token presales with plans of introducing the whitelisted auditors. In the end, it stands as a fully decentralized, autonomous, and highly scalable platform.

Presale Preconditions on The UniCrypt Launchpad

For a project to list on UniCrypt, it has to launch its token, consequently setting a soft and hard cap; this step activates the whitelist function available on the user interface. The project will proceed to the rounds it requires for its presale; the UniCrypt launchpad has a maximum of two rounds.

The token’s team should then specify the currency they wish to raise with USDC, USDT, DAI, and ETH, among several UniCrypt avails.

The first round’s participation is exclusively for UNCX and UNCL (UniCrypt’s native tokens) holders. All holders involved should have $500 worth of either token while the round is expected to go on for 2 hours.

In the second round, anyone can participate or the whitelisted addresses by the token’s team. The event can take place up to two weeks after the beginning of the second round.

An important point to note is that all tokens launching their presale on the platform need to lock a minimum of 30% of the liquidity pool on Uniswap. Nonetheless, it advises locking more than the minimum requirement, up to 100%. The presale platform is linked completely to UniCrypt’s lockers for increased efficiency.

To avoid any exit scams, the token presale team can only withdraw funds from the liquidity lockers after a predetermined period. Therefore, if the project does not hit its soft cap, the platform will fully refund all investors.

On the other hand, its automated infrastructure enables a simplistic approach to all the events that occur on the platform. Scalability is a sure bet regardless of the number of presale activities on the platform.

Finally, UniCrypt aims at presenting equality in the projects that can launch their presales on the platform while giving investors the upper hand to handle their capital. The platform will surely revolutionize the DeFi space offering more faith and opportunities to every interested party.